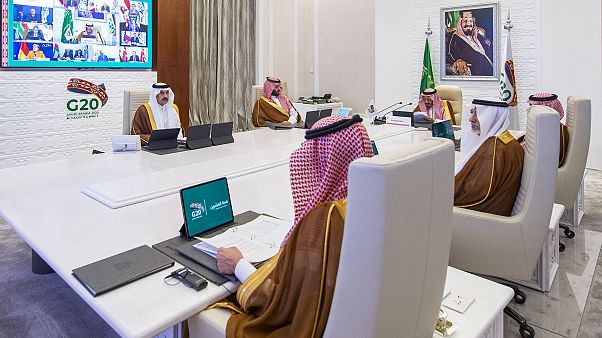 Aircraft flew over the Saudi capital of Riyadh to mark the start of the G-20 summit on November 21.

Saudi Arabia's King Salman opened the Group of 20 summit with the coronavirus pandemic overshadowing this year's gathering of heads of state, transforming it from an in-person two-day meeting of the world's most powerful leaders to a virtual gathering of speeches and declarations.

The pandemic, which has claimed more than 1.37 million lives worldwide, has offered the G-20 an opportunity to prove how such bodies can facilitate international cooperation in crises — but has also underscored their shortcomings.

The G-20's member-countries represent around 85% of the world's economic output and three-quarters of international trade.

The kingdom, which assumed the G-20 presidency this year, is the host of the virtual summit that is bringing together leaders from the world's richest and most developed economies, such as the U.S., China, India, Turkey, France, the U.K. and Brazil, among others.

President Donald Trump is among those expected to participate in the closed-door virtual sessions that are taking place Saturday and Sunday.

'Brexit monster' warns of horrors ahead at Dutch port

France rules limit in places of worship too restrictive

Shops in France allowed to reopen after coronavirus lockdown eased