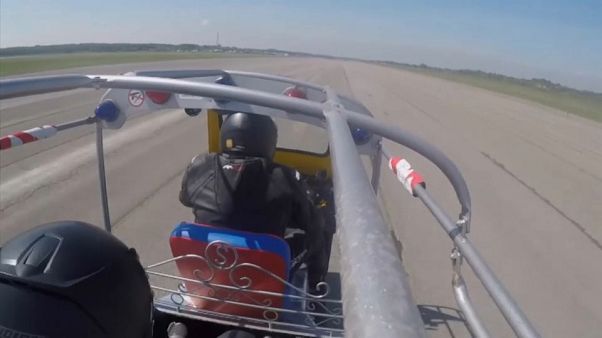 They're usually seen careering along the busy streets of Bangkok, but an authentic Thai Tuk Tuk has made it's way to Britain and into the Guinness Book of Records as the fastest of its type.

Forty-six-year-old Matt Everard, along with his cousin Russell Shearman, reached 119.584 kilometers per hour (74.3 mph) at Elvington Airfield in Yorkshire in their modified Tuk Tuk on Monday after they swapped the original two-stroke 350cc engine with a 1300cc fuel-injected Daihatsu power plant.

But it seems that he is determined to break the 130 kph (80.8 mph) mark in the future and is already planning another engine upgrade.

Shops in France allowed to reopen after coronavirus lockdown eased

Fighting erupts in the Taiwanese parliament over meat imports

Donald Trump cheered by supporters as he heads to golf course